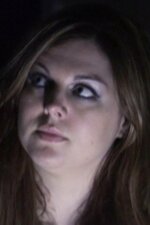 The team heads to an Alabama home where the inhabitants have seen shadow figures, been touched and have recorded a voice telling them to leave.