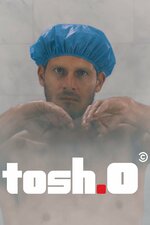 The Mustang kid gets a Web redemption; Daniel discusses which famous women over 40 he would sleep with; Daniel plays a new version of rock, paper, scissors.