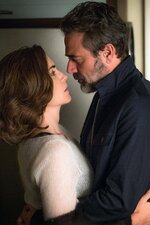 Diane defends the father of a shooting victim after he's charged with defamation for portraying the owner of a gun store as a murderer; Alicia discovers that Grace is accused of plagiarizing her college entrance essay.