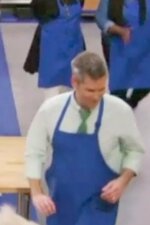 Anne Burrell and Rachael Ray have their teams cook a traditional wiener schnitzel while in a relay-race while playing beer pong; the celebrities learn Oktoberfest-inspired meals including making sausages from scratch; one recruit is sent packing.