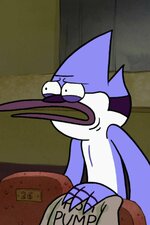 Rigby hears about a new concert for his favorite band and tries to get tickets; tired of Mordecai always beating him, Rigby decides to learn the martial art of Death Kwon Do.