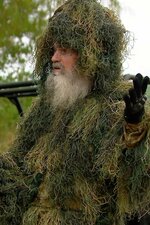 Willie and Jase organize a paintball competition to see which of them would make the better soldier; Phil is called upon to save the day when Jep and Martin have problems laying a sidewalk.