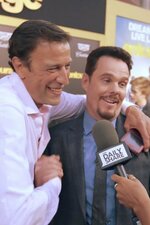 The gang meets its fictional alter egos at the premiere of the "Entourage" film; Brandon wants to throw his grandmother a surprise party, but Alma has other plans.