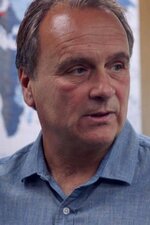 A document shows Adolf Hitler and Leon Degrelle may have moved from Denmark to San Sebastian, Spain; the South American team speaks to an eyewitness who claims his father worked for Hitler's right-hand man, Martin Bormann, after the end of the war.