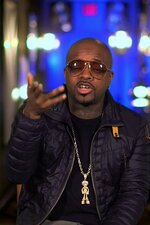 Jermaine Dupri decides which child rapper to sign to So So Def; the artists go head-to-head in a rap battle and prove themselves in a live performance in front of industry insiders including Da Brat.