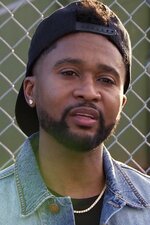 Jermaine gives his young rappers the chance to create a song from scratch with producer Zaytoven and have their works broadcast on the radio; Ricci and her manager must shape up before Jermaine ships them out.