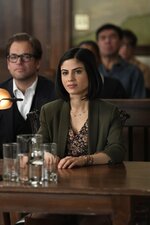 When a state governor and the co-owner of a skydiving company die during a jump, Bull helps the co-owner's brother and daughter fight a lawsuit filed by the governor's widow; Bull and his frequent trial collaborator are on opposing sides in court.