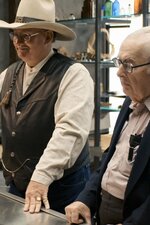 A man says he can prove his bloodstained pistol was owned by Jesse James; a farmer believes he has found proof of aliens in his backyard; the guys try to figure out how two men discovered similar valuable objects hundreds of miles apart.