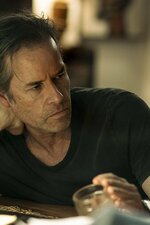 Despite the police ruling Barry's death a suicide, Jack refuses to believe it; Fueled by grief, he tracks down Linda, but she's hesitant to get involved.