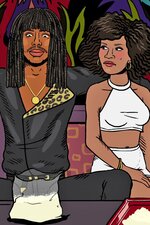 Funk star Rick James rides high on top of the music world in the mid-'80s, but between his rivalry with Prince, crusade against MTV and run-ins with the law, he falls further under the influence of cocaine.