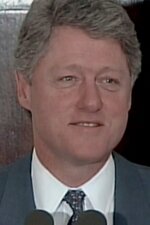 Democrats retake the White House; the scandals that plagued Bill Clinton during the campaign follow him to Washington; President Clinton attempts to put the scandals to rest; Paula Jones files a sexual harassment lawsuit against him.