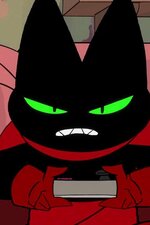 The gang decides to take part in the annual Thumb War competition, but a surprise forces Mao Mao to deal with the possibility of losing.