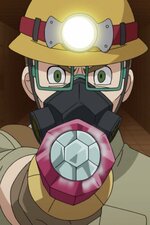 A master thief and his apprentice attempt to steal ancient Bakugan artifacts discovered at Los Volmos; when an ancient Bakugon artifact is placed in the Los Volmos Museum, the Awesome Brawlers stand guard against any attempts at thievery.