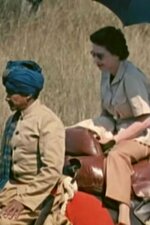 A Royal Tour of the 20th Century

Examining the 1960s, exploring the changing role of the Windsors' relationship to the Commonwealth and the political upheaval in the world; former colonies move toward independence.