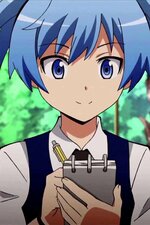 The reasoning behind the E Class's segregation is revealed; Nagisa tracks Koro Sensei's weak points in the hopes of using them to take him down.