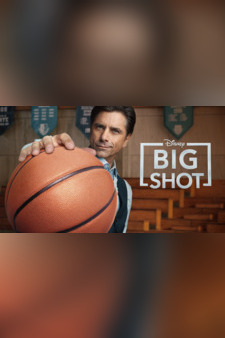 Marvyn and Emma welcome a new house guest: Marvyn’s old statue from Wisconsin, which he has bought in order to prevent it from being melted. This reminder of the past comes as a welcome respite from Marvyn’s obligations at Westbrook, which only seem to be locking him in place more and more: Sherilyn wants to name the gym after him, Goodwyn wants to define their relationship, and Louise looks at Marvyn as more of a dad than her own father. Marvyn finds himself in a tough situation when his constant undermining of Holly as a coach leads to friction between them, and he takes her out to a nice dinner to fix their issues. At the same time, Emma invites the girls over to hang out, which turns into an out-of-control party when Carlsbad boys show up. As punishment, Marvyn forbids Emma from seeing Lucas. Meanwhile, the escalating tension between Louise and Destiny thaws when Louise comes over for family dinner. Later, Marvyn gets some disappointing news from his agent and realizes he’s likely going to be at Westbrook for the long haul.