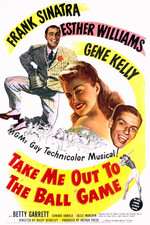 Take Me Out to the Ball Game

Despite being key players for the Wolves, baseball players Dennis Ryan (Frank Sinatra) and Eddie O'Brien (Gene Kelly) harbor a passion for vaudeville. When a local gambler (Edward Arnold) puts a lot of money on the Wolves to lose a big game, he tries to win the bet by offering Eddie the lead role in a newly produced show. Though Eddie is tempted to accept, he risks incurring the wrath of both Dennis and the team's owner (Esther Williams), who just happens to be his girlfriend.