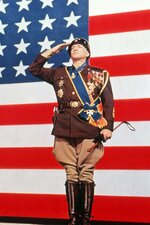 Biography of controversial World War II hero General George S. Patton. The film covers his wartime activities and accomplishments, beginning with his entry into the North African campaign and ending with his removal from command after his outspoken criticism of US post-war military strategy.