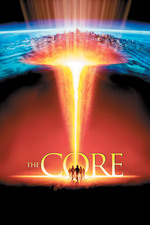 Geophysicist Dr. Josh Keyes (Aaron Eckhart) discovers that an unknown force has caused the earth's inner core to stop rotating. With the planet's magnetic field rapidly deteriorating, our atmosphere literally starts to come apart at the seams with catastrophic consequences. To resolve the crisis, Keyes, along with a team of the world's most gifted scientists, travel into the earth's core. Their mission: detonate a device that will reactivate the core.