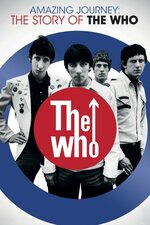 Amazing Journey: The Story of the Who

Add to my Watchlist
Find out where to watch Amazing Journey: The Story of the Who tonight at the American Streaming Guide

This epic documentary reveals the legendary rock band The Who in unrivaled detail. Spanning four decades of their explosive and innovative rock music, the film includes rare and never-before-seen concert and archive footage from the group's humble beginnings to their meteoric rise to world stardom. This in-depth narrative offers extensive interviews with each member of the band as well as testimonials from other rock music icons about the influence of The Who on their own music and careers.