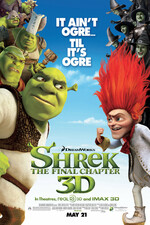 Long-settled into married life and fully domesticated, Shrek (Mike Myers) begins to long for the days when he felt like a real ogre. Duped into signing a contract with devious Rumpelstiltskin, he finds himself in an alternate version of Far Far Away, where ogres are hunted, Rumpelstiltskin rules, and he and Fiona (Cameron Diaz) have never met. Shrek must find a way out of the contract to restore his world and reclaim his true love.