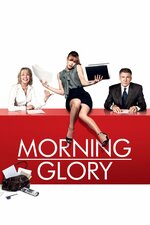 Newly hired as a producer on a national morning-news program called "Daybreak," Becky Fuller (Rachel McAdams) decides to revitalize the low-rated show by bringing in legendary anchorman Mike Pomeroy (Harrison Ford). Pomeroy, however, refuses to do puff pieces like celebrity gossip and fashion, and clashes with his co-host (Diane Keaton). Meanwhile, Becky's romance with a colleague begins to unravel, leaving her struggling to save her relationship, her job and the show.