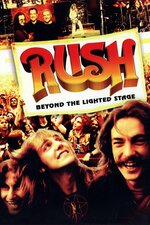 Rush: Beyond the Lighted Stage

Add to my Watchlist
Find out where to watch Rush: Beyond the Lighted Stage tonight at the American Streaming Guide

A documentary about the Canadian rock band Rush relates the group's 40-year history and examines its continuing popularity. Using extensive archival footage, it follows the resilient rockers, lead guitarist Alex Lifeson and singer/bassist Geddy Lee, from when they started the band in the late 1960s through to the present. A diverse group of interviewees, such as musician Billy Corgan, actor Jack Black and "South Park" creator Matt Stone, shares what makes the band so special.