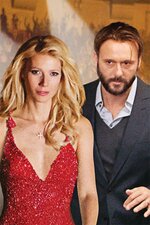 While recuperating at a rehab facility, country-music superstar Kelly Canter (Gwyneth Paltrow) takes a romantic interest in Beau Hutton (Garrett Hedlund), a talented musician who works there. Kelly includes Beau in her plans as she prepares for a comeback tour orchestrated by her manager husband, James (Tim McGraw), who also has a protege he is grooming for stardom. As the quartet goes on the road, personal demons and romantic entanglements threaten to derail them all.