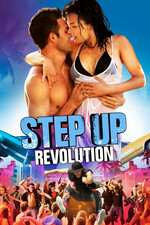 Newly arrived in Miami, young dancer Emily (Kathryn McCormick) dreams of becoming a professional. She soon meets and falls in love with Sean (Ryan Guzman), the leader of a dance crew called "the Mob." When a rich businessman's plans to develop the dancers' historic neighborhood threatens to displace thousands of people, Emily must join forces with Sean and the Mob to turn their performance art into protest art, even though doing so may place her dreams in jeopardy.