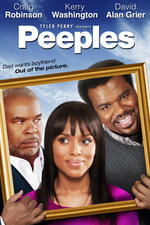 After a year of living with girlfriend Grace (Kerry Washington), Wade Walker (Craig Robinson) is eager to propose to her, but she's still reluctant to introduce him to her snobbish family. When Grace leaves for a gathering at her parents' swanky compound, he hatches a plan to crash the assemblage, charm her folks, and slip a ring on her finger. However, his scheme soon goes awry, and Wade realizes that his only chance of marrying her is a take-no-prisoners confrontation with her father.