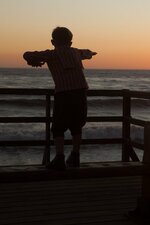 Little Boy is now available to stream and watch online:

When auto mechanic James Busbee (Michael Rapaport) is sent to fight the Japanese during World War II, he leaves behind his wife (Emily Watson) and two sons, London (David Henrie) and Pepper (Jakob Salvati). Pepper feels his father's absence most keenly, and can't wait for him to return home. An encounter with a magician (Ben Chaplin) and advice from a priest (Tom Wilkinson) convince Pepper that the power to bring his dad back safely may be within himself and his actions.