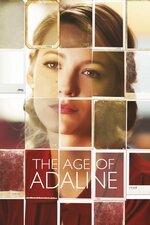 The Age of Adaline

Adaline Bowman (Blake Lively) has miraculously remained a youthful 29 years of age for nearly eight decades, never allowing herself to get close to anyone lest they discover her secret. However, a chance encounter with a charismatic philanthropist named Ellis Jones (Michiel Huisman) reawakens Adaline's long-suppressed passion for life and romance. When a weekend with Ellis' parents threatens to expose the truth, Adaline makes a decision that changes her life forever.