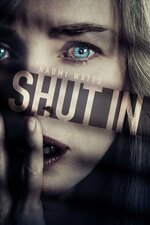 Mary Portman (Naomi Watts) is a widowed child psychologist who lives in isolation in rural Maine. The horrific car accident that killed her husband also left her 18-year-old stepson Stephen (Charlie Heaton) in a bedridden, catatonic state, leaving him completely dependent on her. When one of Portman's young patients vanishes without a trace, she becomes convinced that the boy's (Jacob Tremblay) ghost is now in the house as a dangerous ice storm starts to wreak havoc outside.