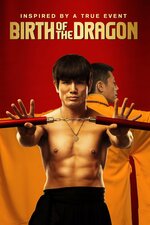 Birth of the Dragon

Birth of the Dragon is now available to stream and watch online:

Young Bruce Lee is trying to make a name for himself while working as a martial arts instructor in 1964 San Francisco. When Lee meets Wong Jack Man, he challenges the kung fu master to a no-holds-barred fight that became the stuff of legend.