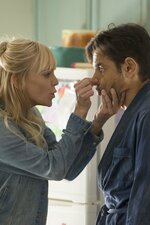 Kate is a single, working-class mother of three who's hired to clean a luxury yacht that belongs to Leonardo -- a selfish, spoiled and wealthy Mexican playboy. After unjustly firing Kate, Leonardo falls off the boat and wakes up with no memory of who he is. To get payback, Kate shows up at the hospital and convinces the confused amnesiac that they're married. As Leonardo tries to get used to manual labor and his new family, Kate starts to wonder how long she can keep fooling her fake husband.