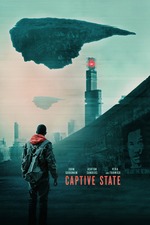 After 10 years of extraterrestrial occupation, residents of Chicago must decide whether to continue to live under alien rule or support the resistance. When young Gabriel Drummond joins the insurgency, he soon finds himself under careful scrutiny from a shadowy figure who's trying to crush the rebellion and its plans for freedom.