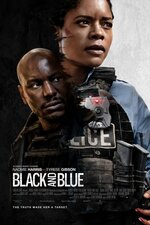 Black and Blue is now available to stream and watch online:

A rookie policewoman in New Orleans inadvertently captures the shooting death of a young drug dealer on her body cam. After realizing the murder was committed by corrupt cops, she teams up with the only person from the community who's willing to help her. Now, she finds herself on the run from both the vengeful criminals and the lawmen who desperately want to destroy the incriminating footage.