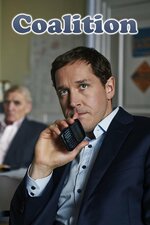 A look at the events surrounding the United Kingdom's hung Parliament in 2010 and the aftermath involving the three main party leaders attempting to form a government.