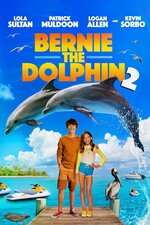 The kids are thrilled that Bernie has come back. But so has their old enemy Winston, who's about to kidnap the talented dolphin. Kevin and Holly must rescue their splashy friend before it's too late.