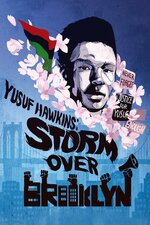 Find out where to watch Yusuf Hawkins: Storm Over Brooklyn tonight at the American Streaming Guide

Racial tensions come to a boil when an angry mob murders Black teenager Yusuf Hawkins in Brooklyn, N.Y., on Aug. 23, 1989. The aftermath of Hawkins' death leads to a social movement as his family and community protesters demand justice.