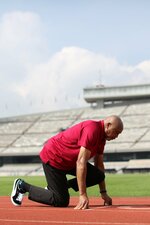 With Drawn Arms is now available to stream and watch online:

An intimate conversation with Tommie Smith, the gold medalist who is known for raising his fist after accepting a medal at the '68 Olympic games in protest of racial inequality. Tommie Smith reflects on the moment that helped define a movement.