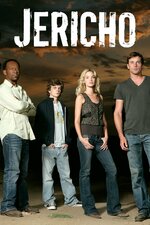 A nuclear mushroom cloud appears on the horizon -- and for the residents of Jericho, a small Kansas town, it could mean they're the only Americans left alive. Fear of the unknown propels Jericho into mayhem, causing the town to come apart at the seams. Secrets are revealed, personal agendas take over and even the most sensible people become paranoid. But even in a time of crisis, some folks will find an inner strength they never knew existed, causing them to emerge as the most unlikeliest of heroes. As the citizens slowly rebuild Jericho, however, they also find themselves in a bitter turf war with the residents of another town, New Bern.