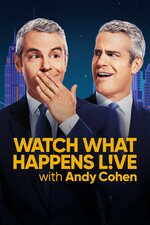 An extension of Bravo's "Watch What Happens" reunion specials and the original live online shows, this interactive series -- live on the East Coast -- is hosted by former Bravo programming executive Andy Cohen, who welcomes guests from some of the cable network's most popular series, as well as other entertainment stars, to chat about pop culture and celebrities in the news. In 2017, the show took on a new title -- "Watch What Happens Live With Andy Cohen" -- as part of an overhaul that included a remodeled studio offering a designated performance space for musical guests, a staple of most late-night shows.