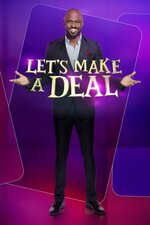 Let's Make a Deal is now available to stream and watch online:

CBS adds to its daytime game-show lineup with an updated version of the classic TV show of the 1960s, filmed in Los Angeles. Hosted by comic/singer/actor Wayne Brady, contestants -- often dressed in a wide variety of original costumes -- will still compete for money and prizes by striking wacky deals. Jonathan Mangum is the show's announcer, and Monty Hall, arguably the best-known host of the earlier version of the show, is listed among the new show's creative consultants. The program won a Daytime Creative Arts Emmy Award for Outstanding Original Song in 2014 for "30,000 Reasons to Love Me," composed by Cat Gray and performed by Wayne Brady.