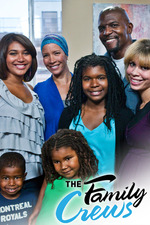 This reality series follows the busy lives of actor Terry Crews and his family, which includes his wife of 20 years, Rebecca, their five kids, whose ages range from 22 to 3, and the family dog Coffee. Viewers see a rambunctious household that never seems to run on "Crews control," as well as Terry trying to find time to make the transition from his longtime role on "Everybody Hates Chris" to an action movie star. And after raising kids and supporting her husband's career for two decades, Rebecca begins to focus on her dreams of singing, acting, producing and writing.