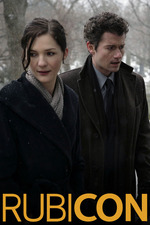 Nothing is as it appears to be for Will Travers, a beleaguered and brilliant analyst with the American Policy Institute, a New York-based federal intelligence agency. When he's faced with a shocking tragedy, he starts to uncover clues that could point to a complex conspiracy ... but in searching for the truth he also struggles with issues of mistrust, power, control and paranoia. Just another day at the office for the protagonist Will, who with every question he asks descends further into a mysterious, dangerous world.