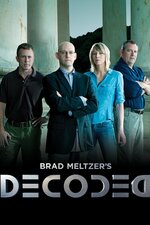 And now you'll know the rest of the story, thanks to the investigations led in this series by best-selling author Brad Meltzer. As he's written about and studied such revered institutions as the U.S. Supreme Court, the presidency, the Secret Service and Wall Street, Meltzer has uncovered countless codes, theories and stories that have remained dormant ... until now. He's joined by a team of researchers to hunt down answers to some of history's most provocative, perplexing mysteries.