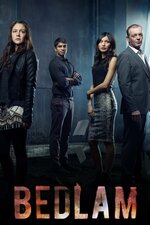 Bedlam is now available to stream and watch online:

The Bedlam Heights apartment block is strangely full of tenants, strange because it's the site of a former mental asylum. It's no surprise, then, that ghosts lurk in the shadows, haunting the flatmates and anyone else who stumbles upon the building's former residents. The tenants can thank their landlord, Warren Bettany, for Bedlam's current state. Bettany renovated the structure into a modern block of flats, and he also took after his dad -- the last in a long line of Bettanys to have run the psychiatric hospital -- in believing that the asylum's brutal and inhuman methods were justified. Warren's attempts, then, to restore Bedlam Heights to prominence may come with a heavy price.