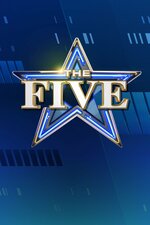 The Five is now available to stream and watch online:

Watch episodes of The Five online:

The weekday opinion show is a round-table ensemble of five rotating Fox News personalities who discuss and debate the top news stories, controversies and issues of the day, from politics to pop culture. Some of the network's featured people who appear include Greg Gutfeld, Dana Perino, Jesse Watters and Juan Williams. The hosts conclude each show by selecting a topic of their choice for the "One More Thing" segment.