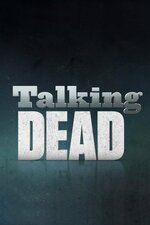 Chris Hardwick is more than happy to host this after-show for "The Walking Dead" franchise that serves as a platform for fans to further dissect the enormously popular zombie apocalypse shows. He's a big fan himself, after all. The bonus, he says, is now he gets paid to talk about something he'd normally be discussing with his friends anyway. "Talking Dead" airs live immediately following Sunday night presentations of "The Walking Dead" and its spinoff, "Fear the Walking Dead," and features Hardwick recapping the most recent episode, talking with fans, actors and producers, and taking questions and comments from viewers.